1. Go to Start > Run >  Regedit
Warning: Incorrect use of the Windows registry editor may prevent the operating system from functioning properly. Great care should be taken when making changes to a Windows registry. Registry modifications should only be carried-out by persons experienced in the use of the registry editor application. It is recommended that a complete backup of the registry and workstation be made prior to making any registry changes.
2. Locate and select the following registry key: 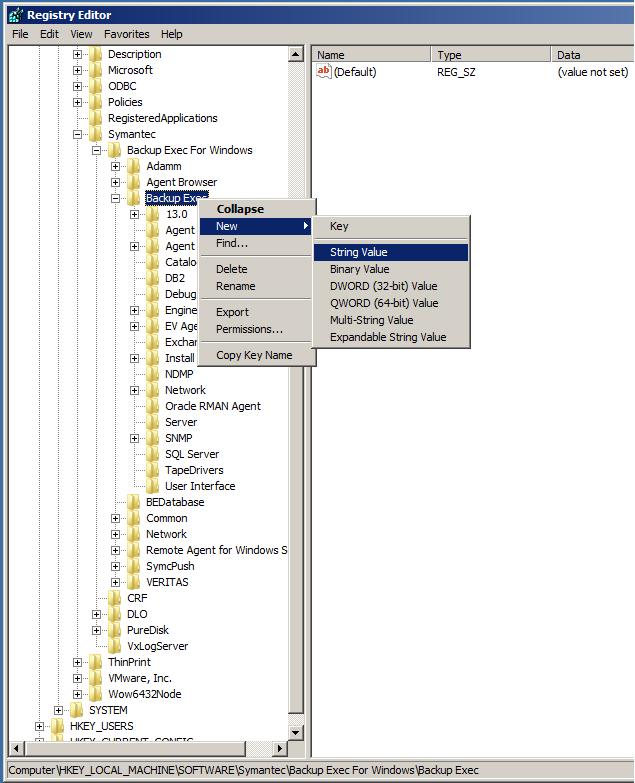 5. Type Language in the Value Name box.
6. Type in the abbreviation of the language Backup Exec should display in the String box (Figure 2): 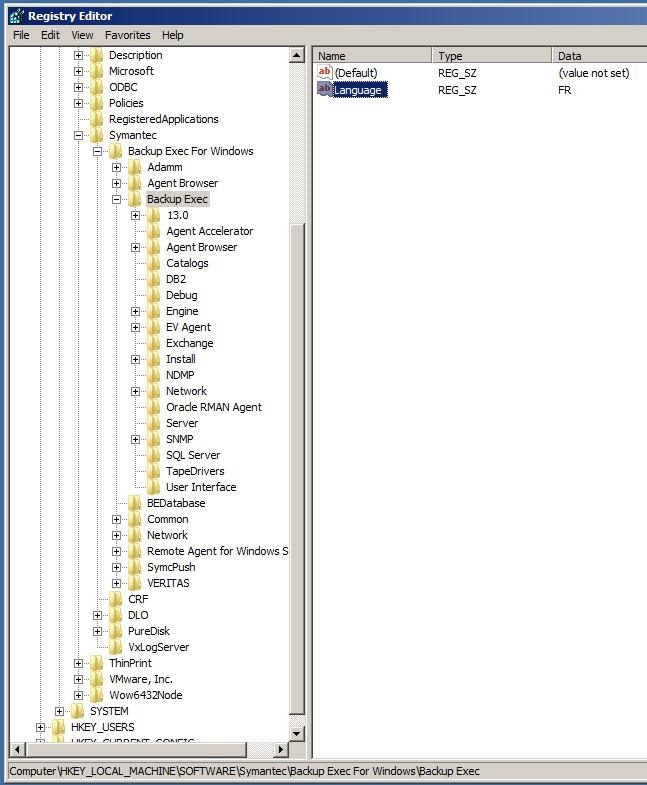 7. Click OK to save changes and then exit Regedit.
Once completed, restart all Backup Exec services and then launch Backup Exec.
Note:  If the language selected for the setting Your Locale is not one of the supported languages, then Backup Exec will be displayed in English. This will occur although the operating system is in a different language and will also occur if the multiple language user interface (MUI) feature of Windows is being used and has the Menus and Dialogs setting set to something other than the locale.
For Backup Exec 2012 or 2014, the following steps needs to be performed:
1. Open the Backup Exec console.
2. Click on the Backup Exec icon (top-left) and select Installation and Licensing > Install Options and Licenses on this Backup Exec Server.
3. In " Add Licenses", " Review Licenses" and " Configure Options" windows click " Next".
4. In " Choose languages" windows select the language which needs to be used and click " Next".
5. In the next window click " Install".  Complete the install.
0 0 votes
Article Rating
Subscribe
0 Comments
Inline Feedbacks
View all comments
We use cookies on our website to give you the most relevant experience by remembering your preferences and repeat visits.
By clicking “Accept All”, you consent to the use of ALL the cookies. However, you may visit "Cookie Settings" to provide a controlled consent.
Cookie SettingsAccept All
Cookie

This website uses cookies to improve your experience while you navigate through the website. Out of these, the cookies that are categorized as necessary are stored on your browser as they are essential for the working of basic functionalities of the website. We also use third-party cookies that help us analyze and understand how you use this website. These cookies will be stored in your browser only with your consent. You also have the option to opt-out of these cookies. But opting out of some of these cookies may affect your browsing experience.
Necessary Always Enabled
Necessary cookies are absolutely essential for the website to function properly. These cookies ensure basic functionalities and security features of the website, anonymously.
Functional
Functional cookies help to perform certain functionalities like sharing the content of the website on social media platforms, collect feedbacks, and other third-party features.
Performance
Performance cookies are used to understand and analyze the key performance indexes of the website which helps in delivering a better user experience for the visitors.
Analytics
Analytical cookies are used to understand how visitors interact with the website. These cookies help provide information on metrics the number of visitors, bounce rate, traffic source, etc.
Advertisement
Advertisement cookies are used to provide visitors with relevant ads and marketing campaigns. These cookies track visitors across websites and collect information to provide customized ads.
Others
Other uncategorized cookies are those that are being analyzed and have not been classified into a category as yet.
SAVE & ACCEPT
Powered by